EasyGiga has decided to no longer offer hosting.


EASYGIGA SA has been registered in the commercial register since 2008. The company provides web hosting services as well as consulting in development, design, web ergonomics and marketing.
easygiga.com easygiga.com

Unreliable web hosting service. Unresponsive or rude ("It's your fault.") to clients.For 3 weeks, I cannot access my sites when I'm at home, because EasyGiga has blocked my IP address. On the day it happened, I was normal internet-based things: email, web surfing, etc.This has happened before - many times - so I immediately contacted them to let them know, "It happened again. Please unblock my IP address." No reply. Yes, it was Christmas and then New Years, but it's a web hosting company - *some*one has to be there at all times. They are listed as being "Open 24 hours," right? So, I wrote again. And again. And again. I've written them every day this week. No reply at all until I posted something on Facebook. And I saw that several others currently have the same problem.Their respo nse to me is "It's your fault."I'm an IT guy. I understand what I'm doing and I know what's going on.A year ago, they claimed that something happening on *my* computer tripped their security system as being a hack or phishing attack. Here's what that "something" was last year:I logged into the EasyGiga site, selected my newly purchased domain and website, and created a new email address. Then, I opened my Mac Mail program, and added the newly created address. Mac Mail, like Outlook and Thunderbird and other email clients, tries to determine the correct email server configuration itself. It does this by trying different, common options. It tries different servers, different ports, different encryption options, etc. They *all* do this.But, EasyGiga sees this as phishing and blocks the IP address. But, only for Macs? Only for Mac Mail? Or, looking at their help section on configuring email for Mac, maybe their Mac knowledge is 5 years out of date, since their instructions with screen shots are not current.They first told me I should select the "Configure manually" option instead of using the automatic configuration. There is no such thing in the current version of Mac Mail. The only way to force a manual configuration is to first enter a name/password combination, let it fail, and then configure manually. But, that's the problem. When it fails, the IP is already blocked, so it's too late to try the manual configuration. Catch-22.Furthermore, I've been a client with EasyGiga for several years. This was not a problem I encountered when I started, and obviously, it wasn't a problem for several years. Then it happened the first time. OK, a glitch in the system, no worries. But, then a second time, a third time, and so on.I told them - first, nicely, but later more urgently - that there's a problem with their detection system, because it's giving false negatives. But, they always turn it around and lay the blame at me, the client.So, when their first suggestion didn't work, they told me I should enter an address with a mistake, to force the manual configuration option. But, that too won't work, because there is no way to do a fully manual configuration. All options involve some guessing which triggers the "danger! phishing attack detected! Blocking IP address."In the past, it has taken us an hour or so to unblock my IP address. I've asked for EasyGiga to change their detection system. I've asked them to whitelist my IP address. I've told them I'd be willing to help them. I've told them I would come to their office with my computer to show them what I'm doing and for them to tell me what I should do differently. I've tried and tried to resolve this.But, this time, starting on 24 Dec 2018, they have ignored my service requests. They only responded today after a public FaceBook posting, which I should say is next to another post from another unhappy customer. So, 19 days they ignored me and only responded because of the negative public comments. And their response? Basically, "we've offered you many solutions, but you continue to complain. Perhaps you should find another web host." WTF?!? Really. First, no solutions, just "try this and see if it works." And now, they tell me to go away.Think twice. For more details: 41.79.783.09.90Please note the third image. This is from my FB chat with them last year, where they admit it's apparently a bug with their system. Have they fixed the bug? Apparently not.
David N. 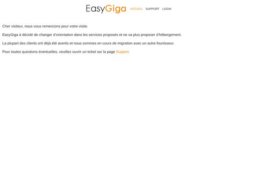 Assessment after the opening of the operation of the .swiss

The general opening of the .swiss took place yesterday, with more than 8000 applications for registration

Launch phase of the .swiss

The launch phase for domain requests with a".swiss" extension has begun.

Looking for a domain name for your site? Selling and buying domains.